Kejriwal interacted with textile traders in Surat on Sunday

Kejriwal promised if AAP is voted to power in Gujarat they will end the ‘Raid Raj’, the way they did in Delhi 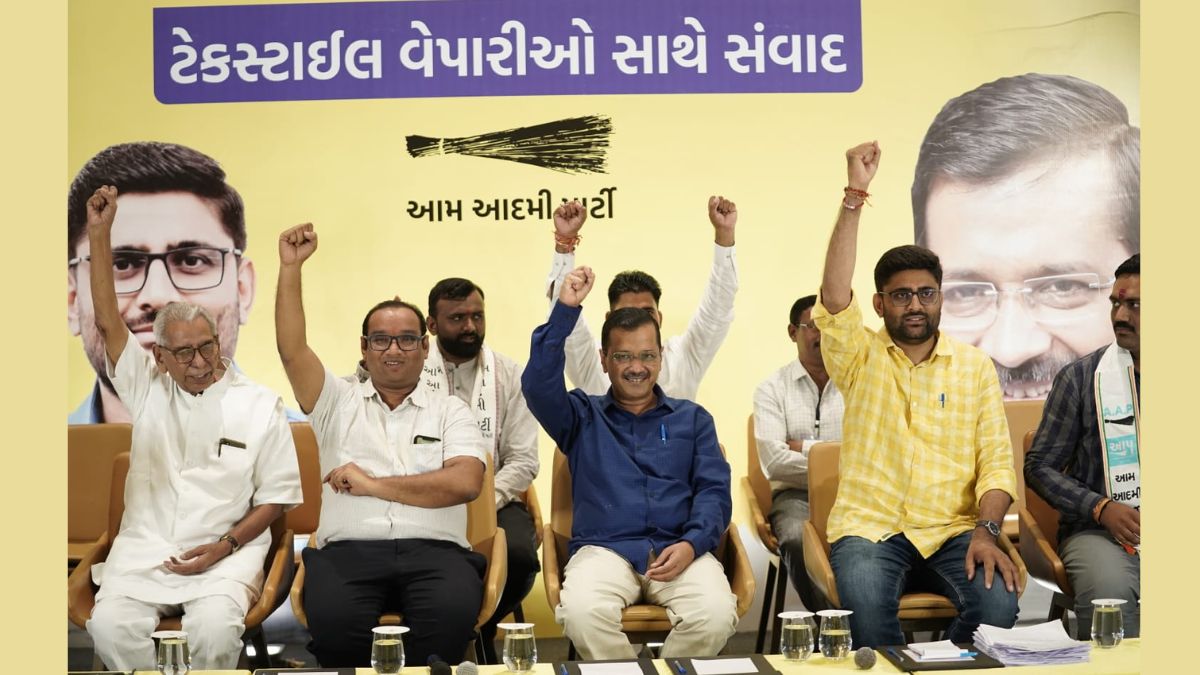 Surat: Arvind Kejriwal, national coordinator of Aam Aadmi Party (AAP) and Chief Minister of Delhi interacted with the traders in the country’s largest man-made fabric (MMF) center in Surat on Sunday. Kejriwal promised to end the ‘Raid Raj’, introduce a special law to protect the traders from being cheated, and make Surat the country’s garment hub with the AAP party elected to power in Gujarat on December 8.

While addressing the traders of the textile industry in Surat, Kejriwal said, “I thank you all for coming here in large numbers. After the long stint of Congress’ rule, BJP ruled Gujarat for 27 long years.  Have anyone ever talked to you face-to-face like this? I’ve heard the BJP only tackle the issues with hooliganism.”

It may be a coincident, but both Arvind Kejriwal and PM Modi are in Surat to address public rallies and meetings with the workers in the run-up to the assembly elections in Gujarat.

Kejriwal promised the textile traders that if AAP is voted to power in Gujarat they will end the ‘Raid Raj’, the way they did in Delhi. “When our government was formed in Delhi, the tax income was Rs. 30,000 crores. Then people used to tell me that don’t end Raid Raj or else there will be less income. But I told people that traders also want to pay tax, just don’t bother them again and again. With the end of Raid Raj in Delhi, all the traders were happy and started paying taxes honestly. Our revenue increased from Rs 30,000 crore to Rs 75,000 crores in just seven years”

“We will make Surat the garment hub not only of Gujarat but of the entire country. A new integrated textile park will be set up, which will be fully export-oriented. It will provide you with various features. I have come to know that where you are working now, there is no water, no sewage, electricity is expensive and many other dilemmas. We will modernize all of them and provide all facilities, which will also provide employment to thousands of children” said Kejriwal.

Kejriwal appeased the textile traders by saying, “The AAP government in Gujarat is committed to increase the loan amount for the MSMEs in Gujarat from the current Rs 25 lakh to Rs 1 crore. We will make electricity tariffs more economical for the sustainability of the textile sector in Surat”

Kejriwal stated that his government in Gujarat will first take up the audit of all the private schools across the state. The government will work in the direction to repay the hefty fees collected by the private schools to the parents. “We will construct model government schools in every village across Gujarat. This will allow the village students to receive education and contribute in the progress and prosperity of Gujarat”

Gujarat Elections: In the BJP bastion, Ahmed Patel’s legacy serves as a ‘ray of hope’ for the Congress in Bharuch