Like Umbhrat, the Oil and Natural Gas Corporation (ONGC) is unwilling to protect its buried sour gas pipeline passing from Surat airport. 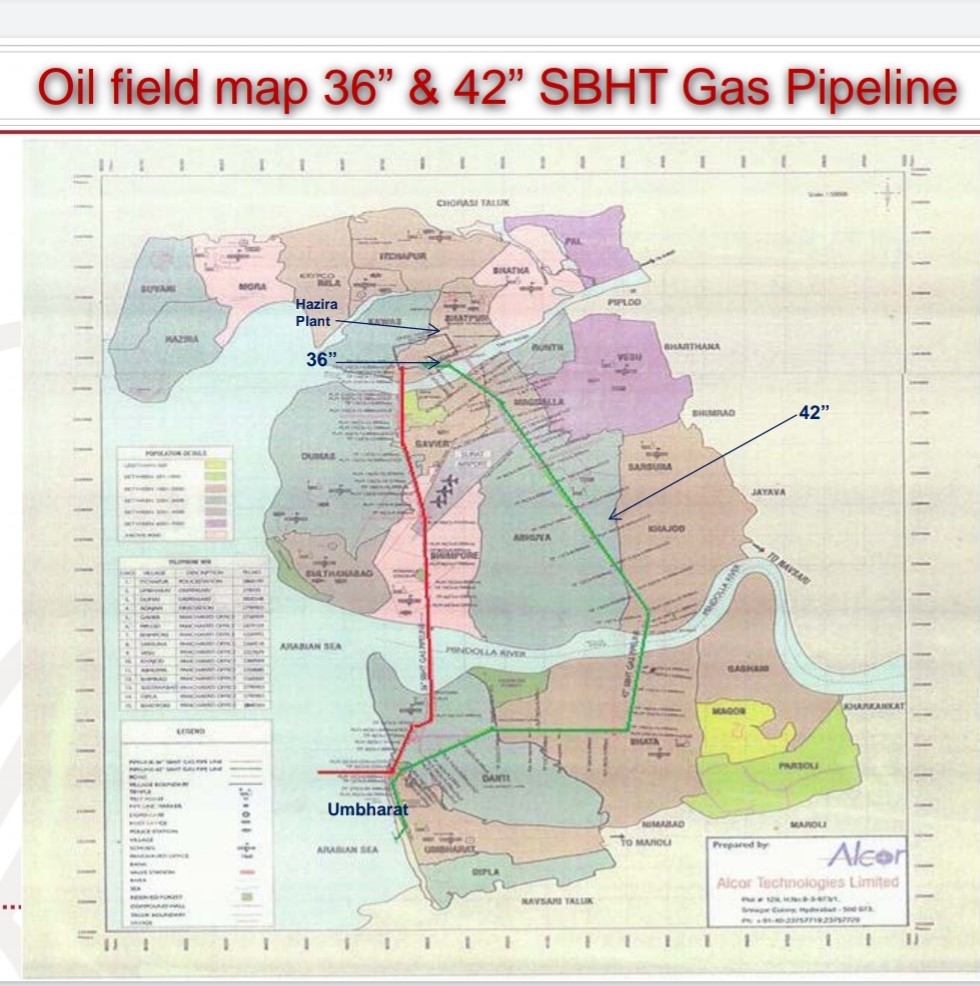 Surat: Why is the Oil and Natural Gas Corporation (ONGC), the Government of India-owned company not serious about protecting its buried sour gas pipelines passing from a close distance at the Surat airport? Well, this issue has remained at the core of discussion with the buried sour gas pipelines that have been hindering the extension of the runway proposed by the Airports Authority of India (AAI). However, information revealed under the Right to Information (RTI) Act reveals a different story altogether.

In 2015, the ONGC had carried out a mega operation of re-routing of its buried sour gas pipeline. The pipeline had drifted from its position following the severe cyclonic storm ‘Nanauk’, that hit the Gujarat coast in June-2014 at Umbhrat beach in Navsari district.

Both the 36 inches and 42 inches diameter South Bassein Hazira Trunk (SBHT), which carries gas from Bombay High offshore to ONGC’s Hazira plant for processing and then transfer it via Hazira-Vijapur-Jagdispur (HVJ) route.

The SBHT pipelines come from Umbrath in Navsari district from Bombay High offshore to Hazira Plant. However, the 42-inch pipeline suffered many accidents starting from the year 2009. There was a major accident of drifting of the pipeline during 2014 Cyclon at Umbrath and then after ONGC took a project of rerouting of 1.9 km span by all most 3-5 meters.

They completed the project successfully on July 21, 2015. However, the experience and expertise of re-routing and restoring the sour gas pipelines at Umbrath can be replicated at Surat airport on Rwy 04 (Dumas) side to displace pipeline, which is a major hurdle in the extension of runway length.

ONGC was supposed to submit a survey report of protecting the pipeline by a culvert or encasing and allow construction of runway over it. This report was to be submitted in February-2020,  but to date, the ONGC is yet to take the matter seriously and submit its status report.

It is worth noting that the then  Union Minister for Petroleum and Natural Gas, Dharmendra Pradhan, who had visited Surat in 2019, had assured for a quick solution in the presence of BJP’s Navsari MP, CR Paatil, and Surat MP, Darshana Jardosh. Even the chairman and managing director (CMD) of ONGC was also brought to Surat for the inspection and to offer remedial measures. Unfortunately, the ONGC is yet to make any headway, and that the extension of the runway at Surat airport is hanging in balance.

ONGC had concluded its feasibility survey study for gauging the possibilities for constructing a culvert to protect its buried sour gas pipelines in November-19, which are the major hindrance in the runway extension project.

It was proposed that a culvert will be constructed to protect the buried sour gas pipeline at the Dumas end of the runway. The culvert will have the capacity to handle more than 140 tones per square meter weight, which is enough for the wide-bodied aircraft for landing and take-off.

Both the 36 inches and 42 inches diameter SBHT pipelines were laid in the year 1985 and 1996 respective to transport sour dry natural gas from Bassein Platform A (BPA) and Bassein Platform B (BPB) offshore process platforms to an onshore gas processing plant located at Hazira in Surat.

ONGC raised concerns for the safe operation of both the pipelines due to the proximity of runway of Surat airport located at Magdalla, which has undergone extension from 1,400 meters to 2,250 meters towards the route of 42 inches diameter pipeline in the south east direction in 2007 and from 2,250 meters to 2,905 meters towards route 36 inches diameter pipeline in the north west direction in the year 2015-16.

A senior AAI officer told TOI, “We have sent more than a dozen letters to the ONGC authorities to share the feasibility survey report for the sour gas pipelines passing from the airport premises. The ONGC authorities are yet to reply over their plans to either shift the pipeline or to construct a culvert on the pipeline”

A Surti woman clinched the title of ‘Mrs. India Talented’ at the ‘Mrs. India Queen of Substance-2021’ pageant at Delhi

I am the Magan Madari of Surat airport.