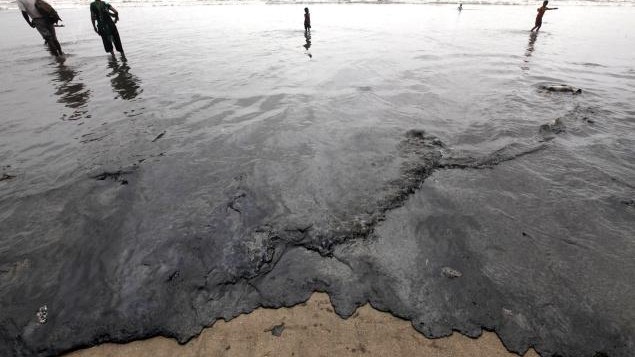 Surat : The city-based Brackish Water Research Centre (BWRC), a non-government organization (NGO) working for the environment and fishery in coastal areas of Gujarat, has demanded a thorough investigation and environment impact assessment by the Directorate General of Shipping (DGS) into the sinking of the cargo ship near Valsad coast.

The ship ‘MV Kanchan’, loaded with steel coils from Hazira port in Surat was going towards Mangalore. On July 21, 2021, the cargo ship capsized near the Valsad coast due to rough weather conditions. However, there was no loss of life as the  ship’s crew survived and reached Umbergaon safely in the rescue boats.

The capsized ship was loaded with fuel, which rapidly spread in the sea polluting the water. The coast guard had spotted oil in the sea and the DG shipping was informed about the oil spill in the sea.

According to BWRC, the fish breeding season is going on in the West Coast of India and that the fishing activity is prohibition in the territorial waters as well as EEZ. However, the oil spill in the sea water will have serious consequences on the marine life, coastal ecology and the fishing community.

Talking with TBT, MHS Shaikh, president of BWRC said, “The coastline between South Gujarat and North Maharashtra is experiencing the oil spill deposition from the last one decade and the government agencies are yet to find the culprits. The tar balls have been accumulating over the coastline for years, causing serious coastal pollution in the 150-200 kilometer area in the sea.”

Shaikh added, “The oil spill and tar ball deposition is being observed in the sea since the start of 2009, but the government is yet to initiate action to protect the coastline, fishing community and the ecology.”

Shaikh stated this is the first time in last one decade that the ship disaster is reported in July. The ship owners should be dealt with strictly under the provisions of law including protection of marine and coastal environment for spreading pollution in the sea.

“The fish catch by the fishermen community in Valsad and Umbergaon has phenomenally decreased in the last one decade due to serious oil pollution in the sea. It is our demand that the DG shipping must carry out a thorough investigation and environment impact assessment based on scientific research and book the ship owners for the violation of Shipping Act” said Shaikh.

Adani Group becomes the official partner of the Indian contingent at the Tokyo Olympics.

‘The key to unlock the afterlife’