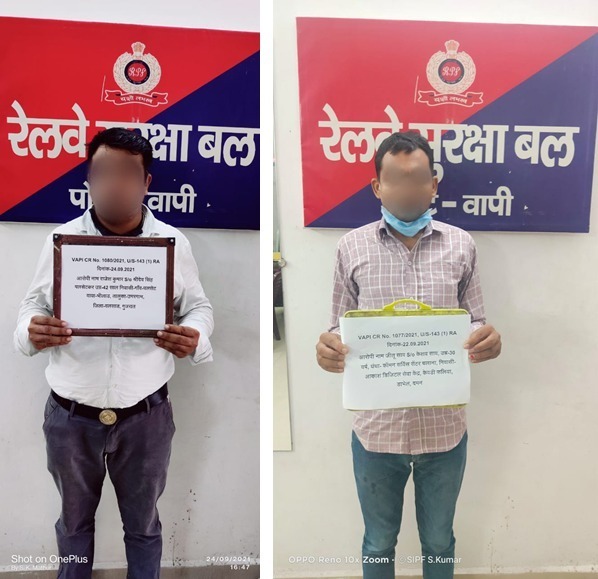 Surat: The Railway Protection Force (RFP) in Vapi apprehended touts involved in the unauthorized sale of the railway tickets to innocent passengers with the waitlisted tickets during the ongoing festive season.

The Western Railway (WR) has been conducting special drives against the touts, luring innocent passengers with waitlisted tickets and charging exorbitant illegal commissions, especially during the festival and vacation period.

In one such case, the RPF team at Vapi apprehended the touts identified as Jitu Sav, 30, a resident of Dabhel in the union territory of Daman, and Rajesh Kumar Palsetkar, 42, a resident of Bhilad in Valsad’s Umbergaon taluka on Saturday. The duo was caught red-handed for selling the confirmed railway tickets to the gullible passengers in the long-distance trains.

According to a press release issued by Sumit Thakur,   Chief Public Relations Officer (CPRO) of WR, Vapi jurisdiction also covers the union territory of Silvassa and Daman. About 58 cases of unauthorized sale of railway tickets by the touts have surfaced in   2020-21 with the seizure of 1,176 tickets and Rs 17.67 lakh cash.

An intense drive for 15 days had been launched by RPF – Vapi with a special team to clamp down upon touts. The team looks into both online and offline ticket touting activities to take down the rogue elements. Apart from such regular drives for arrest and prosecution of touts, several awareness campaigns are also being conducted by RPF for sensitizing the public for not purchasing tickets through illegal touts and the legal provisions under the Railways Act, for taking stringent action against such illegal ticket touting.