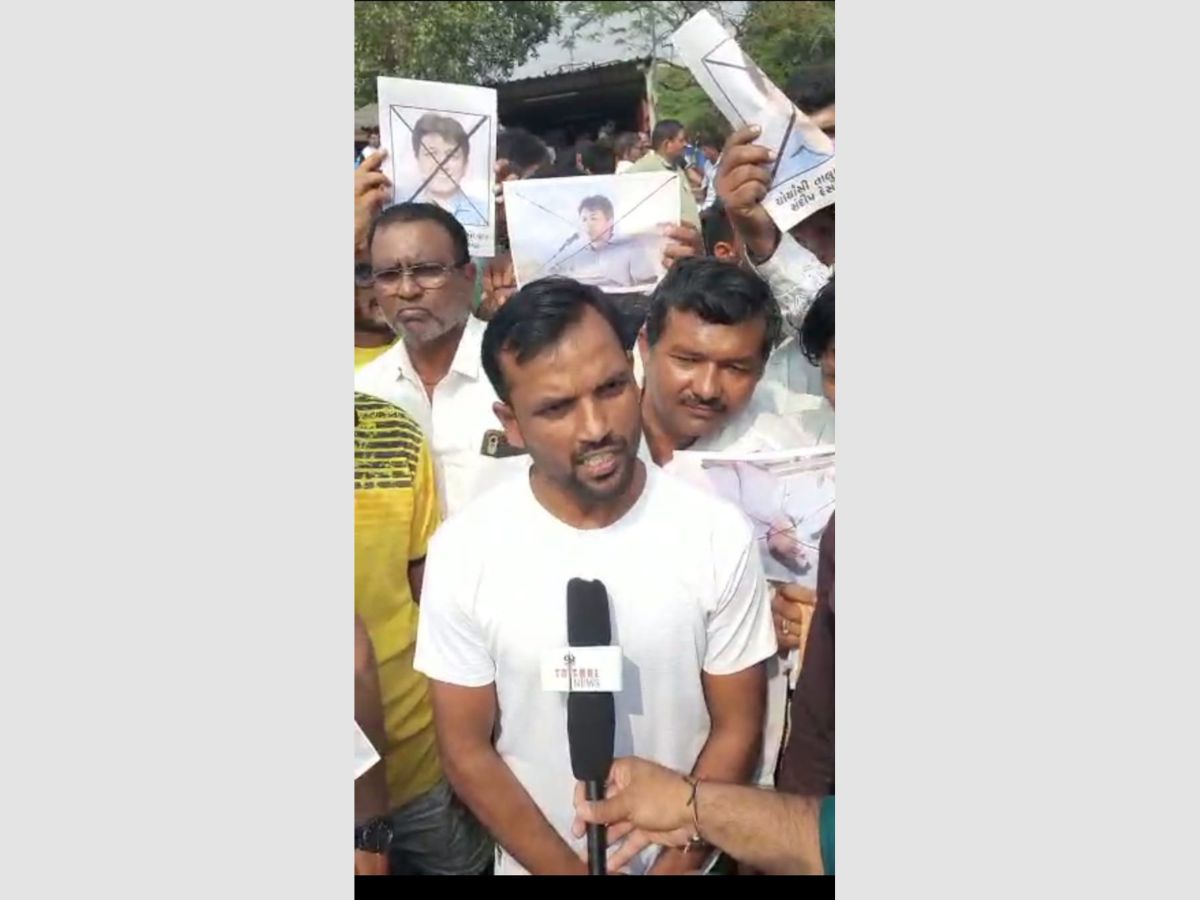 Surat: Choriyasi assembly constituency is the lone seat in Surat where the BJP is facing stiff opposition. For the first time in many years, Koli Patel, considered the staunch supporter of the BJP, has raised their head against the party after Sandeep Desai filed his nomination on the BJP ticket.

After a long suspense, the BJP announced Sandeep Desai’s name as its candidate for the Choriyasi seat while dropping sitting MLA Zankhana Patel.

Tens of thousands of Koli Patel in the industrial belt of Hazira, Dumas, Bhimpore, Abhva, Khajod, Magdalla etc., took to the streets to oppose the candidature of Sandeep Desai. The Kolis have given an ultimatum to the BJP leadership to revoke their decision and field the deserving Koli Patel candidate for Choriyasi seat.

The Koli Patels, carrying the placards of Sandeep Desai with a big X sign on his face, marched in their respective villages in the coastal belt and opposed his candidature. The Koli Patels have unanimously decided to put up the banners and  posters disallowing Sandeep Desai and the BJP workers for election campaigning in their villages.

The community members said that the Koli Patels have ensured the victory of BJP in all the assembly and Lok Sabha elections from the Choriyasi assembly seat and Navsari Lok Sabha seat since 1975. They have been the staunch voters of the BJP. However, the BJP leadershp backstabbed them by fielding a non-Koli Patel candidate.

Dipak Patel, leader of Koli Samaj said, “If the BJP had problems with Zankhana Patel they could have given ticket to a deserving Koli Patel candidate and not Sandeep Desai whose community has merely 10,000 votes. On the other hand, the Koli Patels has more than 1.60 lakh votes out of the total 5.50 lakh votes in the Choriyasi seat”

Patel added, “We have communicated to the Koli Patel voters in the constituency to either vote for AAP or Congress candidate and boycott the BJP candidate”

The Koli Patels are furious with the BJP leadership for fielding Sandeep Desai, an Anavil Brahmin, for the Choriyasi seat. Desai is the BJP Surat District President and holds key positions in cooperative entities such as sugar, the Agriculture Produce Market Committee (APMC), the Surat District Bank, and others.

The majority of Choriyasi’s constituency is part of the Navsari Lok Sabha constituency, which is represented by Gujarat BJP President CR Paatil. Koli and migrant voters in Choriyasi play an important part in the BJP candidate’s victory. It is an urban-rural seat and one of Surat’s largest seats.

Political experts believe the Choriyasi seat would surprise electors in Gujarat’s forthcoming assembly elections. The Koli Patels are dissatisfied with the BJP’s Sandeep Desai’s candidature, and votes may shift to the Congress and AAP candidates. This time, the AAP has fielded Prakash Contractor, a social activist and farmers’ leader who has been involved in addressing concerns concerning the Choriyasi area in Surat for many years, such as pollution, illegal construction, farmers’ issues, and so on.

The Congress has fielded Kanti Patel, popularly known as Kanti Abhva, a social activist. Kanti Patel is more vocal in his opposition to the illegal shrimp farms in Choriyasi taluka, and he is leading a campaign against the Airports Authority of India (AAI) and the Gujarat government over the proposed reservation of farm lands for the Surat airport’s runway expansion.