BJP will get a clear majority, no competition in Surat in the coming assembly election : Piyush Goyal 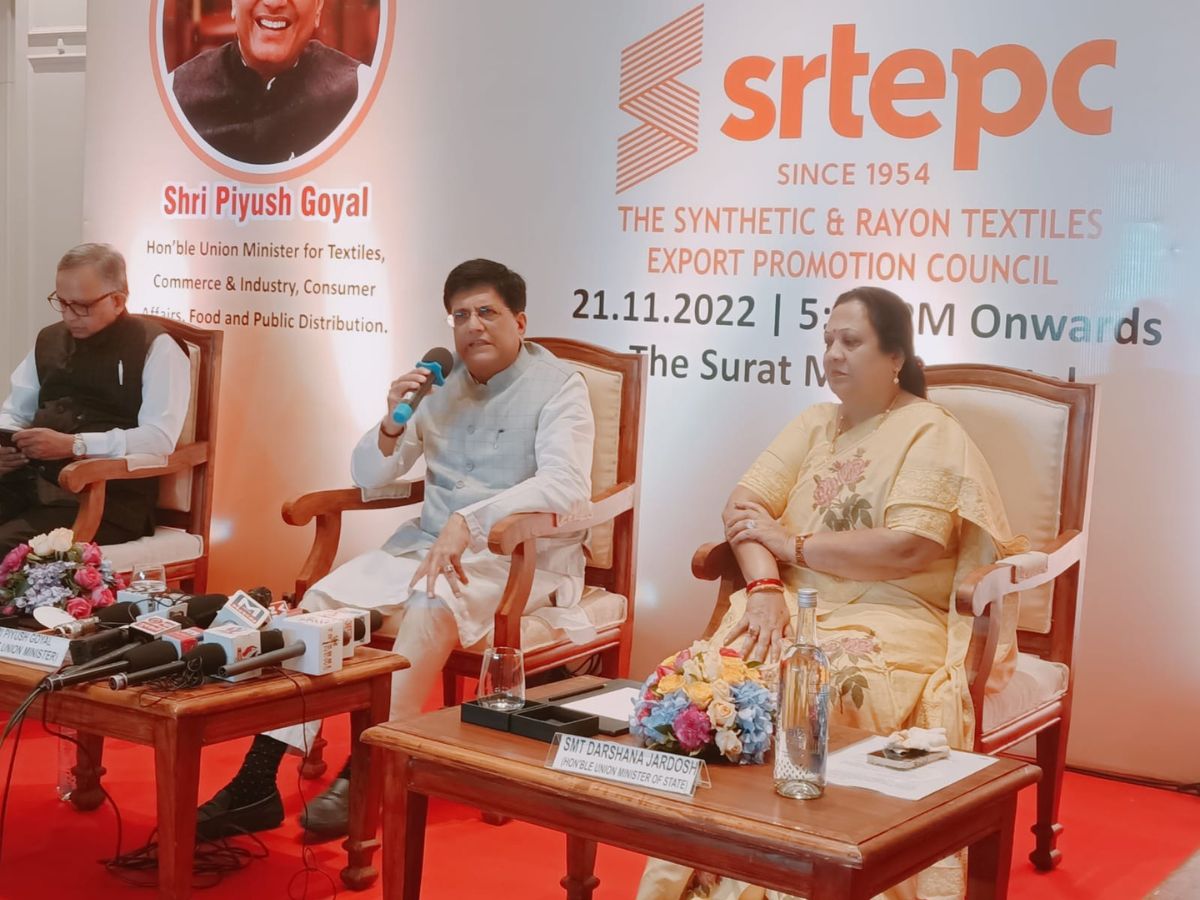 Surat : Union Minister for Textiles, Commerce, and Industry Piyush Goyal went all out to appease the stakeholders from the diamond, textiles and the Saurashtrian Patidars during his one-day visit to the poll-bound Surat on Monday.

At the interactive meeting organized by the Synthetic and Rayon Textiles Export Promotion Council (SRTEPC) on Monday evening, Goyal said, “I have come here to meet the industry stakeholders, not as the minister, but as the committed worker of the BJP. You have to decide whether you want a stable, secure and credible government in Gujarat or those giving false commitments in the coming elections”

Counting on the achievements of the Modi-led government at the Centre, Goyal said, “India’s textile ecosystem could reach $250 billion in the next 5 to 6 years. Surat is the centre for manufacturing Man-Made Fibre (MMF) fabrics and has a share of about 50% in the country. The government is all prepared to incentivize the manufacturers for developing innovative textile machinery thereby reducing the import dependence on the countries like China”

“In the first phase of the Product Linked Incentive (PLI) scheme, we appoved about 64 companies out of which 13 companies are from Gujarat, especially from Surat and Ahmedabad” said Goyal.

Later in the day, Goyal visited the diamond hub of Varachha also known as the hub of Patidar community and addressed meetings with the industry stakeholders and the Saurashtra Patidar Samaj.

“Since morning, I am seeing young faces wherever I have gone. The young generations is all set to change the fortune of Gujarat’s economy in the coming years. I see the GDP of Surat growing at over 20% in the coming few years” said Goyal.

Interacting with the media persons, Goyal said, “I don’t see any competition or direct contest in the coming assembly elections in Surat. The BJP will win all 16 assembly constituencies with double victory margins”

SRTEPC had organized an interactive session with the industry stakeholders, but the programme was cut short as the minister had to leave for New Delhi in the evening.

FASHIONITE 2022 by INDIAN INSTITUTE OF FASHION TECHNOLOGY, Bangalore to Kickstart