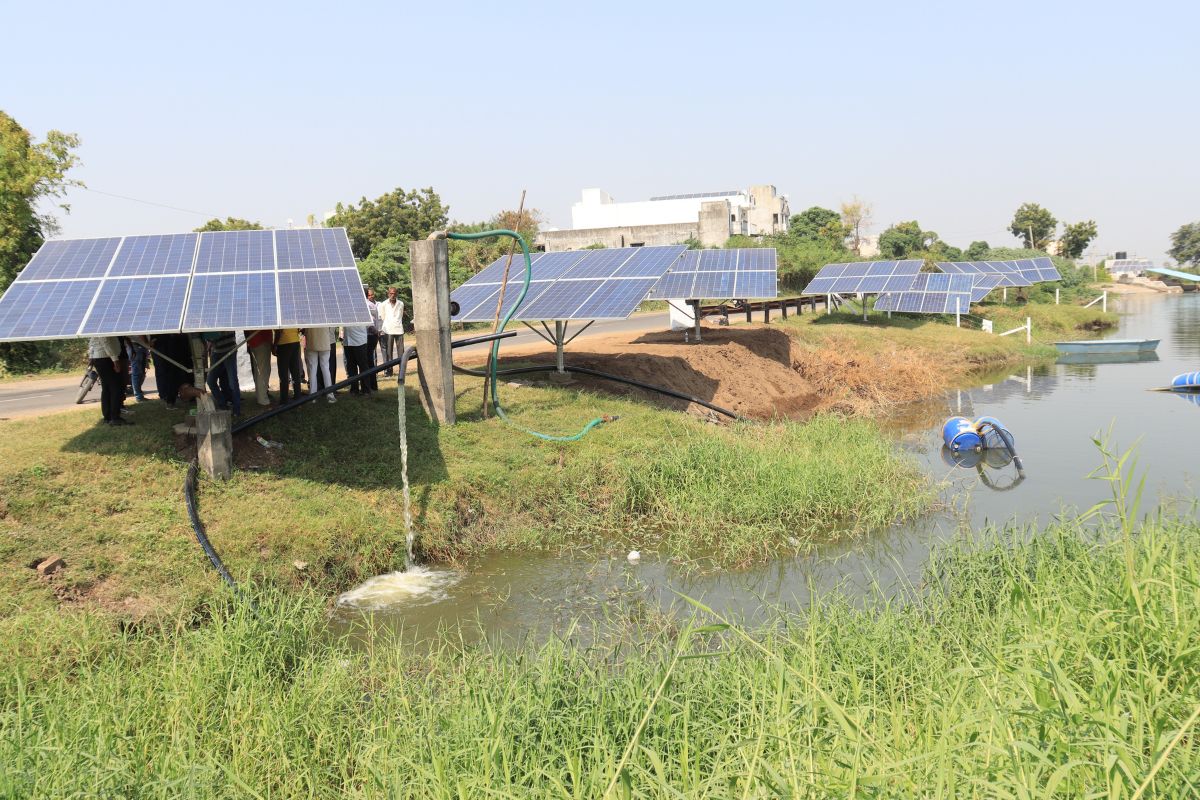 Surat: Bhandut, a nondescript village in Surat district’s Olpad taluka is the first in Gujarat to adopt solar-powered irrigation system for irrigating about 688 bighas of agricultural land. Thanks to the Adani Foundation for facilitating the installation of solar-powered irrigation pumps under the Public Private Partnership (PPP) model with the support of the Village panchayat and the Irrigation Department of the Gujarat Government.

Earlier, the farmers of Bhandut village would collectively spend a whooping Rs 1.10 crore for irrigating their farmlands with the use of diesel pumps. The project was taken up by the Adani Foundation on the PPP model and about 15 solar powered pumps of 5-HP each have been installed at the lakes in Bhandut village for irrigating a vast area of farmlands.

The Solar Pump installations have brought an abundance of benefits to the lives of beneficiary farmers. Adani Foundation is always in the process of creating opportunities for the farming community to help them benefit from the latest knowledge and technology. Through this initiative, the farmers are not only saving precious wealth by not buying diesel but also saving in the form of labor costs and time.

A total of 401 farmers are reaping the benefits of the initiative. Looking at the average annual savings on diesel, the farmers will collectively save approximately Rs. 9.13 Lakhs monthly and Rs. 1.10 Crore annually. Similarly, the farmers will be saving Rs. 20 lakhs in labour and many hours. In addition to this, 3000 working hours are saved per month and 36000 hours annually. One of the major indirect benefits of the initiative has been the utility of those few farmlands as well which were not productive due to lack of access to irrigation.

The transition from diesel to solar has a positive impact on the environment as well; as per the calculation, the total CO2 emission avoided in the village by eliminating diesel pumps is 269916 KG per year.

Mukesh Patel, Minister of State for Agriculture, Energy, and Petrochemicals in the Gujarat Government inaugurated the solar-powered pumps and witnessed the completion of the last phase of the Clean Energy initiative of the Adani Foundation.

Mukeshbhai Patel said, “The Clean Energy initiative of Adani Foundation has helped Bhandut village become diesel pump free and benefited 400 farmers cultivating 688 Bigha of agricultural land of the village. The land has been irrigated with fifteen 5-hp pumps facilitated by the Adani Foundation. The implementation of the scheme on the PPP model has increased farmers’ incomes with cost and time savings.”

The main source of water for irrigation at Bhandut village is three ponds and to direct water to their respective farmlands, farmers would use diesel-run motor pumps. The disadvantages were many and the farmers ended up spending a lot of money and the diesel contributed immensely to the noise and air pollution. Those poor farmers who couldn’t afford to purchase diesel pumps had to spend money for renting the pumps to irrigate their farmlands.

According to Adani Foundation officials, solar water pumps are environmentally friendly, there is no requirement for fuel and they require minimal maintenance. The village panchayat had a ready network of underground pipelines leading to the farm fields from the ponds.

Following the huge success of the solar-powered irrigation system in Bhandut village, about half a dozen villages surrounding Bhandut have urged the Adani Foundation to carry out a similar project in their respective villages.

Policemen serving the country should get benefits of soldiers: Dr. Vikram Siddareddy